While downhill Alpine skiing offers spurts of intense action in-between times spent driving to and from resorts and standing in line at lifts, all that’s needed for Nordic cross-country skiing is a few inches of snow and strap-on skis to transform any nearby park, wooded trail or spacious backyard into a quiet, serene eco-playground. The similar dry-land recreation of Nordic walking that uses poles can be enjoyed year-round.

Both the standard Nordic form of what’s also known as free-heel skiing and the more challenging Telemark style, able to incorporate hilly terrains, have northern European roots. Cross-country skis are longer and thinner than downhill versions. Instead of placing the entire foot in a bulky, stiff boot affixed to an alpine ski, only the toe section of a sneaker-like boot adheres to a cross-country ski, enabling a fuller gliding motion.

Gliding over relatively flat terrain while leaning slightly forward, it’s important to keep weight evenly distributed over both skis. Continuously moving ahead in a left-right-left-right motion with a long gait creates a full-body workout as each opposing arm plants a pole and pushes on it to carry the skier into the next step.

Cross-country skis aren’t made for sudden stops, so stay alert; gentle, side-to-side skidding employing both legs or turning the front of both skis inward to form a triangle effects stopping. With experience, the skis can be used more like long ice skates, pushing both ahead and outward on them to move slightly faster on wide, groomed, flat surfaces.

Vermont native Bill Koch, the only American to win an Olympic cross-country ski medal—silver at the 1976 Innsbruck Games—helped popularize the recreational sport in America. On February 20, the 2016 Slumberland American Birkebeiner, North America’s largest annual cross-country ski race, is expected to attract about 10,000 participants on a 55K course from Cable to Hayward, Wisconsin (Birkie.com).

“Many of the movement patterns of Alpine and Nordic skiing are similar,” explains Michael Wood, chief fitness officer of Koko FitClub (KokoFitClub.com), which is reflected in a new eight-week Snow Sports program at many of its 130 locations in 30 states. “Our Smartraining equipment offers more than 100 different exercises, many of them ideal for preparing for cross-country skiing, like the squat, hip extension, and trunk and hip rotation.”

Outdoor winter recreation can help shed pounds. Harley Pasternak, a celebrity trainer, nutrition expert and author, recently reported in Health magazine, “Being outdoors in the cold air enables your body to burn more calories as it makes an effort to warm up. When you’re chilled, you shiver and shake, which is your body’s way of warming itself by increasing its resting metabolic rate.”

Pasternak says that spending time outdoors in cold weather can increase calories burned by as much as 30 percent and advises, “Take up ice skating, cross-country skiing or snowshoeing.”

Nordic walking, launched in Finland in the late 1990s and since spread throughout Europe, incorporates some motions similar to cross-country skiing. Walking while using special poles on dry land or at the beach extends associated health and fitness benefits year-round. Initiated 11 years ago, the American Nordic Walking Association (anwa.us), based in Palisades, California, conducts classes and other events nationwide. 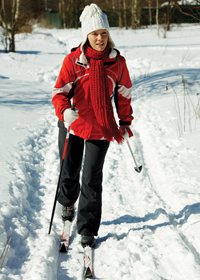 Founder, president and master coach Bernd Zimmerman reports significant growth in its popularity in recent years. “Both cross-country skiing and Nordic walking are great full-body workouts that use 90 percent of your muscles and treat both the upper and lower parts of the body like machines.”

Suitable for all ages, including those that have balance or health issues or can’t run anymore, the walking poles act as extensions of the hands. Their rubber or metal tips work on any surface, such as streets, sidewalks, gravel, sand, dirt or grass. Compared to regular walking, Zimmerman says the Nordic style burns up to 40 percent more calories, tones the arms and upper body, reduces stress on knees and joints, and safely boosts the intensity of exercises to yield additional heart and lung benefits.

Randy Kambic is an Estero, FL, freelance writer and editor, including for Natural Awakenings.

Winter Trips for the Intrepid

Enthusiasts that have built up stamina might consider taking a multi-day backcountry or mountainous trek along marked trails. Overnight stays are offered in lodges, huts or cabins, with many providing cross-country equipment and showshoes. Here are some examples of the awaiting adventures.

Colorado
The nonprofit 10th Mountain Division Hut Association was one of the first to establish a hut-to-hut system, encompassing 350 miles of trails in the Rocky Mountains. (Huts.org)